Skip to contentSkip to navigation

Get tested for Bowel Cancer now

What is the ColoAlert Bowel Cancer stool test?

ColoAlert® is an award-winning next-generation colorectal cancer home screening test developed to detect changes in the bowel earlier and more accurately than the standard 'FIT' test and testing is recommended every three years from the age of 45.

The most common symptoms of colorectal cancer are:

If you are experiencing any of these symptoms, the ColoAlert test can help to rule out bowel cancer and provide you with peace of mind.

What's the difference between our BASIC and PLUS tests? Click here to find out more.

PLEASE NOTE: Cancellations made after the test have been sent out in the post are subject to a £25 admin fee.

No need to visit
hospital

Why should I get screened for Bowel Cancer?

Men and women aged 60 to 74 who are registered with a GP in England are automatically sent a bowel cancer screening kit (FIT test) every 2 years.

Are there different types of ColoAlert tests?

The ColoAlert Basic Test is an at home Bowel Cancer Screening Test to detect DNA changes AND blood in the stool which may indicate the presence of cancerous or precancerous growths in the bowel. It is available for £349.

The ColoAlert Plus Test is an at-home Bowel Cancer Screening Test to detect DNA changes AND blood in the stool. which may indicate the presence of cancerous or precancerous growths in the bowel. This difference with this test is that it also counts abnormal quantities of Bowel Cancer cells present in the stools sample h(DNA). Bowel cancer patients have a larger quantity of cells in their bowels indicating cancer. This test is available for £399.

How do I use the ColoAlert test?

The first thing to understand is, it's really not as bad as you think. You can do this!
There's no need to be squeamish. It's straightforward, takes only five minutes and could save your life.

STEP 1 - Firstly, line the water at the bottom of your toilet bowl with paper. This is to "catch" your poo before it hits the water.

STEP 2 - Secondly, take the "cocktail stick" supplied with your ColoAlert test pack and collect a small sample of your stool. You only need a very small amount.

STEP 3 - Thirdly, immediately, place it in your "cocktail stick" "test tube", screw it shut tightly, mark it up with your details and that's it. All done and you can get on with your day! 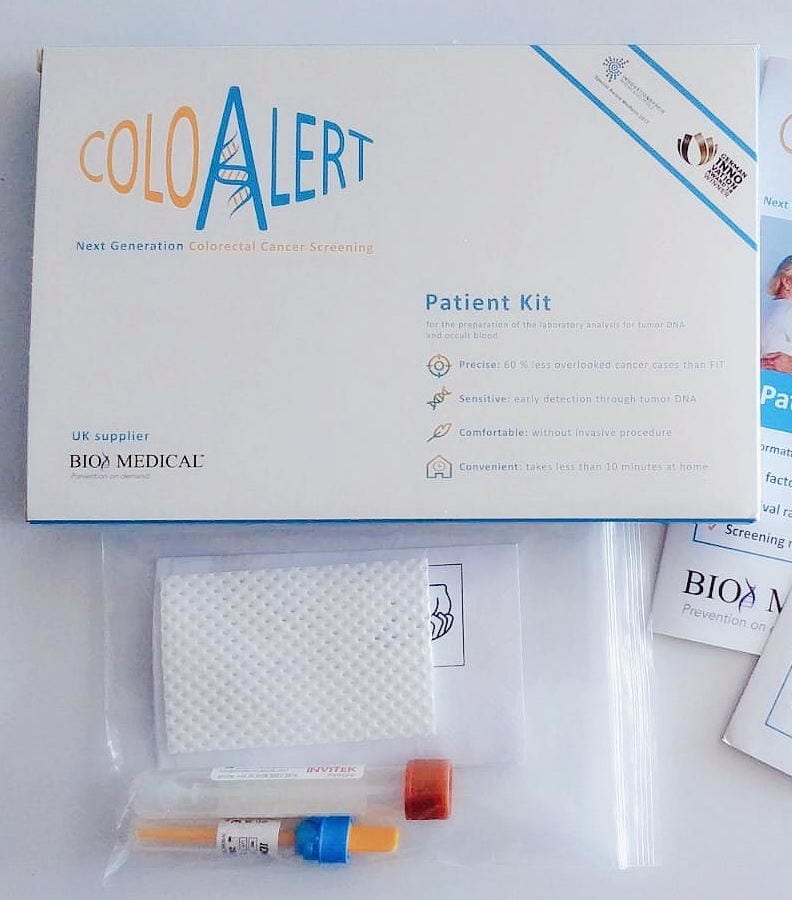 ColoAlert® is a non-invasive screening test that is superior to the FIT test in terms of sensitivity. It is currently the only stool DNA testing kit for colorectal cancer screening via the direct detection of mutated tumour DNA in Europe.

The colon mucosa continuously sheds cells, which get passed into the stool. In case of colorectal cancer, unhealthy cells will equally be shed into stool, along with normal healthy cells. ColoAlert® in principle can detect those unhealthy cancer DNA cells early, in some cases even before any abnormal cell growths can be endoscopically detected through a bowel scope and long before any symptoms (such as bleeding) may appear.It is therefore an excellent option for patients who do not wish to undergo a bowel scope without cause.

Colorectal cancer can also release blood into the stool, which is detectable by the FIT test. However, blood in the stool may also be caused by other health conditions such as inflammation, haemorrhoids and inflammatory bowel diseases (IBD) such as Crohn’s disease and ulcerative colitis.

Furthermore, not all bowel cancer polyps, especially in early stages and right-sided ones, will have blood shedding in the stool. The following table presents an overview and comparison of the three main colorectal screening methods available in the UK.

How does ColoAlert work? 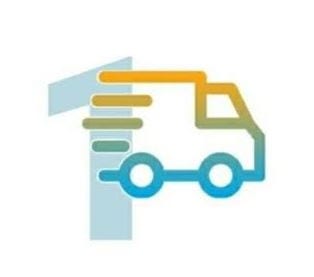 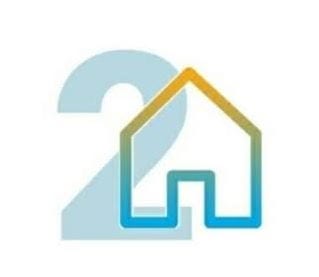 Your ColoAlert test kit will arrive in the post containing 2 tubes and instructions on how to use. The test takes just 5 minutes. 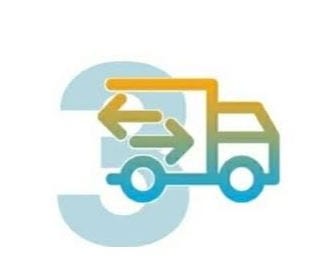 A courier will collect your sample which you will have put into the secure, prepaid envelope provided with your kit. 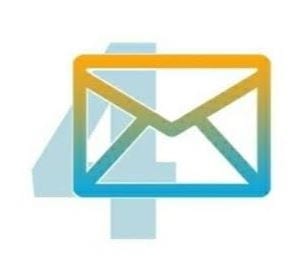 Your results are prepared in our specialist ColoAlert laboratory and will be ready in 5 to 9 days. You'll be notified of your results via a password protected email.

Excellent from start to finish. All staff were friendly and professional. My doctor was particularly helpful. Would highly recommend to anyone seeking a quick and effective service!

What is Colorectal Cancer?

Colorectal (bowel) cancer is a general term for cancers that are located in the areas of the colon (colon cancer) and the rectum (rectal cancer). It is the 4th most common cancer in the UK after breast, prostate and lung cancer and responsible for over 42,000 new cases in the UK per year, of which 56 % were in men and 44 % in women, accounting for 12 % of all new cancer cases.

The table overview shows the mortality for common cancers, broken down by sex.

What are the symptoms of Colorectal cancer?

The most common symptoms of colorectal cancer are:

However, the symptoms of colorectal cancer are usually very vague, non-specific and can be from different diseases. Furthermore, these symptoms usually appear only in the later stages of the disease and many people with early stage colorectal cancer may not have any symptoms at all. Therefore, it is difficult to diagnose colorectal cancer based on symptoms alone and screening is vital in providing more accurate diagnosis and management. 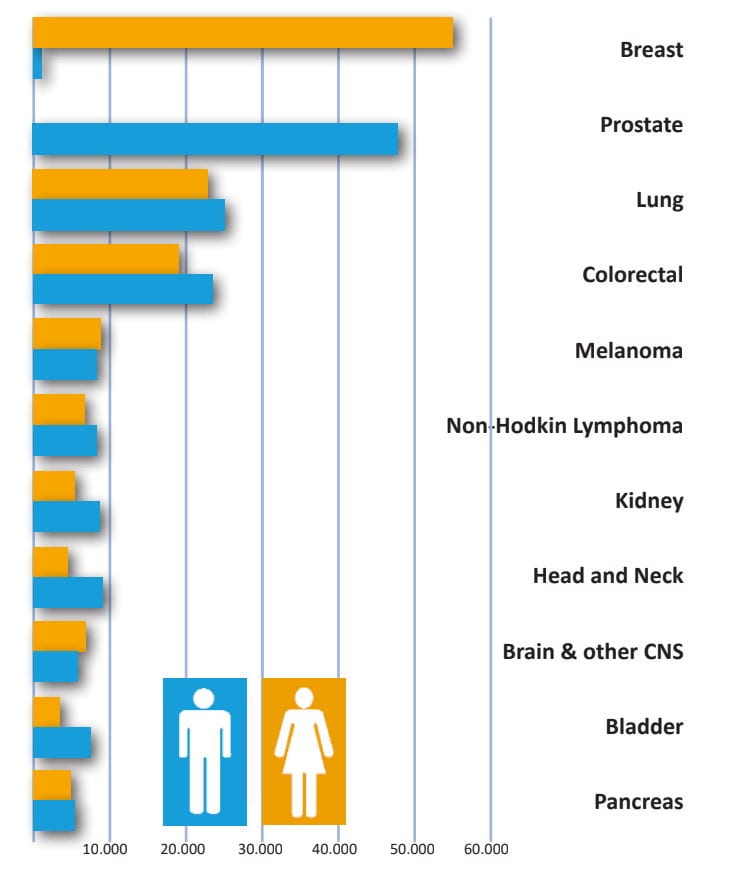 How is Colorectal Cancer treated? Expand

On diagnosis of colorectal cancer the most common treatment options involve:

What is Colorectal Screening? Expand

The purpose of colorectal cancer screening is to detect and treat the disease as early as possible, since survival rates significantly drop with a later stage diagnosis.

Why screen for Colorectal Cancer? Expand

Colorectal cancer most often results in death if left untreated or diagnosed late. It is the second-largest cause of cancer mortality in the UK with 16,300 deaths per year, accounting for 10 % of all cancer deaths in the UK, which equates to 45 deaths per day (2015-2017).

The Dukes Staging system differentiates between four cancer stages and is based on the degree of spread of colorectal cancer. Each stage corresponds
to a decreasing 5-year-survival-rate:

However, a significant proportion of cases (61 %) diagnosed at stages II, III and IV already report spread of the cancer outside the bowels. In recent years, there has been a dramatic rise in new colorectal cancer cases per year, especially in younger age groups (ages 30: 6.8 % rise/year; under 50s: 1.8 % rise/year).

Undertaking colorectal cancer screening is therefore critical for the early detection and prevention, and in turn higher chances of cure and survival.

Screening can be done within the NHS from 55-59 with colonoscopy and from 60 years onwards with FIT tests. However for tumour DNA tests such as ColoAlert®, many experts including the US Food and Drug Administration (FDA) recommend to start from 45 onwards, thus allowing for an earlier detection with increased survival rates.

Who can use ColoAlert? Expand

Anyone who wishes to be screened for colorectal cancer without an invasive procedure can use ColoAlert.

Recommended from the age of 45: Aging can increase the error rate of the replication process of genetic material in cells. This can give rise to mutant DNA, which promotes the development of colorectal cancer. Recent scientific evidence advises for screening to start at the age of 40.

Exceptions:
Patients with a family history of colorectal cancer should be referred to a geneticist. In the event close family relatives (parents, siblings) have developed colorectal cancer under the age of 50, there is an increased risk of other family members developing the condition deriving from hereditary genes not tested with ColoAlert®.

How long does it take to undertake the test? Expand

The CE-IVD-certified ColoAlert® kit contains everything you need to collect a sample at home in just 5 minutes. The stool samples are processed by our accredited laboratory.

How long does ColoAlert take? Expand

1a) See your private GP for an initial consultation about your symptoms. Your GP will inform you about your possible screening options with respect to your symptoms and provide you with the ColoAlert® patient kit to take home.

1b) ColoAlert® patient kits are also available on the ColoAlert® website in our online store. Please consult our website for an up-to-date list of Colo-
Alert® retailers on www.bioxmedical.co.uk

2) Please carefully follow the instructions in the ColoAlert® patient kit provided to you to collect the two required stool samples.

3) Once your samples are collected and appropriately labeled, please follow the provided postal instructions.

4) Important information: the samples need to be sent latest the next day after sample collection in order to arrive at our specified lab within max. 96 hours. Weekend mail is to be avoided due to possible delays in shipping times during non-working days.

Make your next step...

Use your medical insurance at Pall Mall Medical...

Skip back to navigation

Search by condition, treatment or department: